Greetings! We're still in the middle of reconstructing the sim in line with the next huge chapter in the Eisa timeline. For those of you who missed last year's treasure hunt, its theme was heavily concerned with disintegration of reality. Ancient ruins, tears in space, strange new robot control devices, and hostile anomalies began to appear all over the city, and it quickly became clear that what was going on was not merely some minor accident caused by a rogue pilot testing out an experimental rocket engine in orbit. After a climactic fight with a huge anomaly that threatened to destroy the entire colony, things took a turn for the worse, if not for the worst, and in the end a massive explosion obliterated Eisa Colony and its surroundings.

Months after the explosion, when the dust has finally settled, we'll finally get a chance to look at what was buried beneath the city, and at the source of all these strange phenomena. What exactly is the Relic controller, and who made it? Was Eisa home to alien life before it was settled by modern humans? Will vi0let ever succeed in her quest to make a sentient toaster? These questions and more will all be answered soon...

For those of you new to Eisa, yes, this means that roleplay is suspended in all practical senses, although our siblings and friends at Gaga-Rin are still very industrious and active on the far side of Eisa, so don't worry! There's still plenty of fun to be had in the Better Today universe.

The latest @beacon was rife with discussions, topics ranging from future software updates to the new forums (seriously, go sign up for it!), though the greatest topics of discussion were the upcoming hologram programming and features as well as the upcoming holiday event. One idea that was humored was something of a holovirus, though it likely won't be anything more than a flight of fancy for some time. The holiday event for this month is, as we all can guess by this point, a treasure hunt of sorts. Rumor has it that a ship sporting an experimental FTL drive malfunctioned and exploded over Eisa, raining shattered parts down upon the city. We, the loyal and dutiful citizens of Eisa, get to find these scraps and turn them in. Just be aware that what you dig up might not appreciate being found.

Apparently, some entities don't take kindly to friendly trick-or-treaters that just want to help clean their yard. Let's give them a hand and tidy things up anyway.

A New Chassis for the Puddle Zone. 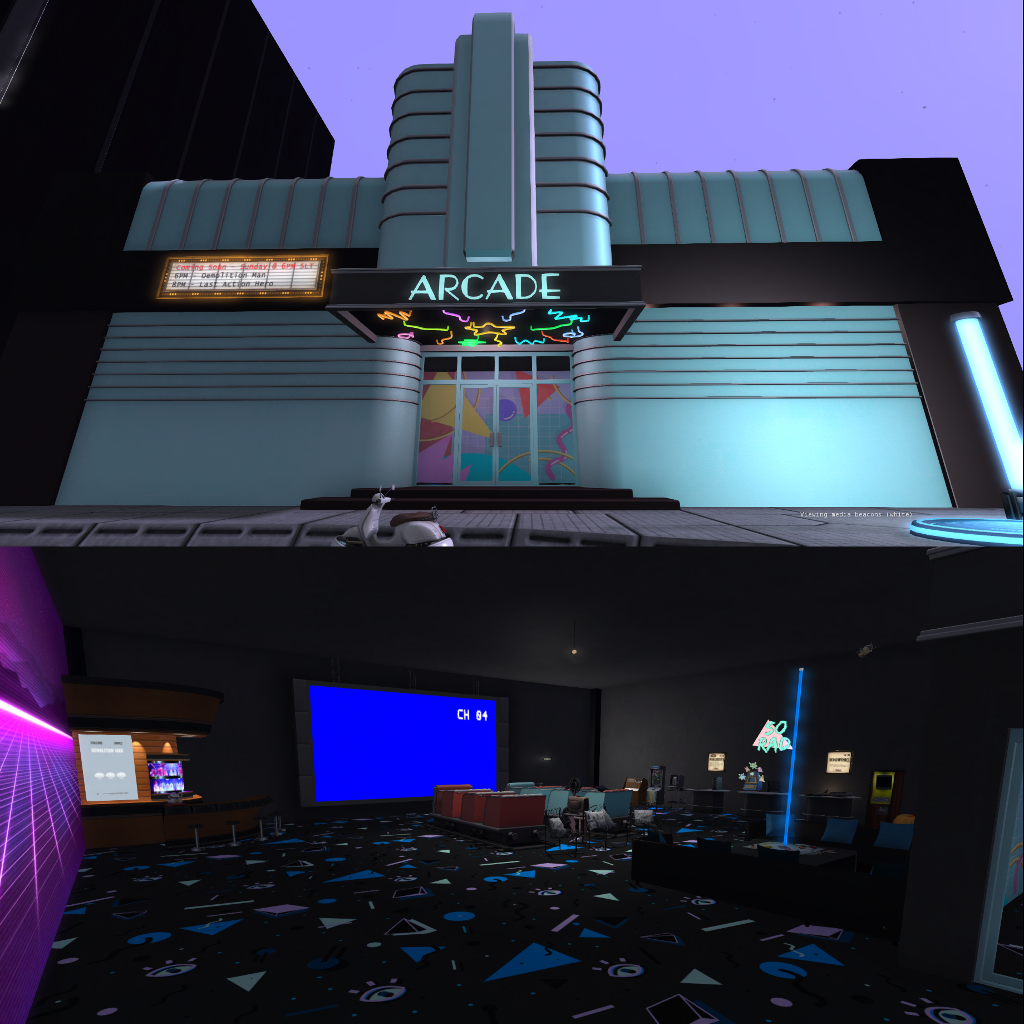 Nanite City, Eisa -- Visitors to The Puddle Zone's southern Upper Plate location after last Saturday's protests may have been surprised to find it moved. The small arcade/theater, managed and operated by local courtesan m3w, has been a popular social hangout for Nanite City residents, particularly on Sunday's double-header movie nights, with popular movies such as "Blade Runner 2049" and "Wall-E".

m3w's establishment is not gone, however, it has simply moved to a newer, larger, Streamline Moderne site in the northeast corner of the Upper Plate. Most of the contents of the old location have been retained, including the security guard, w3m, and the Monopoly-board dance pole, but some new features have been added, such as a bar and... doors. Hopefully, this new space and layout will continue to contribute to an open, welcoming culture in Nanite City.

For more pictures about the new arcade, click here!

Lore Day 2018 is coming soon! On Saturday, June 16, join us in Indigo Creek Park at 12 PM SLT for our annual celebration of the history of NS, Eisa, and the Recreational Cybernetics Group. More details soon!

Early this morning, the gynoid known as vi0let was found atop the Arcade, having been heavily damaged by an unknown force. It's suggested that it was vandals attempting to permanently render vi0let offline, though other factors are being considered. If anyone has any information regarding this incident, please inform NanoSec and myself at your earliest convenience.

Updates will be posted as they arrive.

Did you know Eisa has its own space colonies? Javik Station is another sim set in the Better Today universe. It's not far from the Purple Pearl, and specializes in services for men, especially men who have sex with men. Starting this Friday they'll be hosting a regular dance event for the whole community, and if you're reading this, you're invited! Two hours of amazing music, fresh, new minds and bodies to meet, and an excellent opportunity to find out just what happens when you stick a sausagefest and a clambake together.

Admission is free, dress code is wild. All attending gynoids will receive free capsules of liquid laundry detergent at the door.

P.S.: Check out Javik Station as soon as you can! Their coordinates are here.

Eyes were drawn to the spectacle of a NanoSec raid on the old Rhapsody Robotics building today. Multiple explosions were heard as the building was breached, one unit suffering severe but only temporary damage. Soon after the explosions, ambient radiation was detected, prompting NanoSec to forcefully disperse the gathered crowd. NanoSec chief LY-N13L said "Rhapsody robotics will be seized by NanoSec to do further investigations as they are being accused of doing illegal conversions here at Eisa." about the incident, "Entering said building behind me will be classified as tampering with the crime scene until further notice, which is punishable by the law." Currently, no one aside from NanoSec officers are allowed inside the building under penalty of immediate detainment. No suspects have been mentioned regarding the contents of the building, nor have the contents of the building itself been listed.

More information will be provided as it arises.

Radiological Spill In The City!

Earlier today, a radiological indicent struck Eisa, bathing parts of the city in low-level radiation. The unit known as NVX-116 was in possession of several nuclear batteries and dropped them, though how the unit came into possession of said batteries is still unclear. The one responsible for the incident, the unit has been apprehended and its owner, Momoko Matsuda, has taken responsibility for the actions of her property. Restitution and cleanup of the incident is pending. NanoSec officer iPup K9 masak0 gave this statement: "Unit 116 was released to Miss Momoka with punishment to come later via community service. If further issue happens, any punishment is possible."

This reporter hopes that the residual radiation is cleaned up quickly so that the current city beautification efforts may continue as planned.

Due to the relatively short notice with which the initial date for this year's spooky story night was announced, we've decided to move it to 5 PM SLT on October 28, just after our fancy Halloween costume dance at 3 PM SLT. Both events will have L$ prizes, so polish up!

Everyone is strongly encouraged attend the campfire after the dance, even if you don't have anything to share—we need voters, and it's a great opportunity to soak up new ideas for future roleplays.

Following the campfire, we'll be unleashing Phase 2 of the autumn treasure hunt, with a return of last year's fishing minigame, 4 new resource types and 7 new prizes, including some pretty darn cool gadgets! So don't run, pretties...

The Hunt is Live!

Legends tell of a robot uprising in Eisa almost eleven years ago to the very day, when a horde of cleaning and cargo-hauling droids ran rampant through the colony, slaying rebel and corporate lackey alike! Recover the components of the dead machines, as well as the supplies they stole, now scattered throughout Eisa by reckless, forgetful visitors looking for grisly souvenirs from their time on the paradise moon.

Your instructions are in the briefcase next to vi0let at Club io. Good luck!